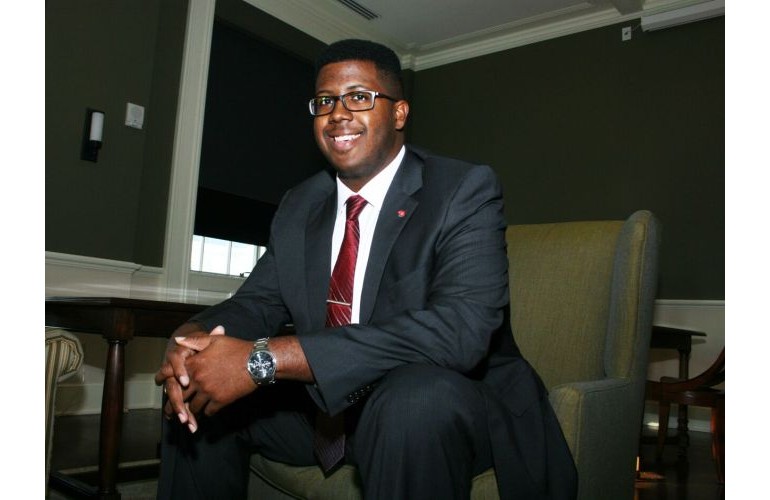 Supporting yourself throughout undergraduate years can be tough.  But working while learning is the new normal, according to a recent study “Learning While Earning: The New Normal”

Malachi Nichols was one of 14 million people both active in the labor force and enrolled in post-secondary education in the United States in 2015, when he graduated with dual bachelor degrees in mechanical engineering and African American studies from the University of Arkansas (UA).

At UA, many students work on campus.  Most on-campus jobs are work study positions. There are also non-work study employment, which are university funded positions.  Many students also seek employment within an office affiliated with their academic major. For example, a biology major might try contacting the biology department.

For Malachi, a college resource opened doors to an off-campus opportunity.

Fresh on campus, he signed up for the Research Experiences for Undergraduates (REU) program in 2011. REUs support active research participation by undergraduate students in any of the areas of research funded by the National Science Foundation.  Malachi’s seminal paper “Silicon Nanowire Module for Undergraduate and High School Education” stood out and got him noticed.

Soon after, he was brought on at a local nonprofit to create and teach a robotics program. In the first year of the program, he coached the team to a 9th place finish at the 2013 Arkansas First Lego League State Tournament. Malachi went on to serve in various roles ranging from robotics teacher, program director assistant, and lead teacher at the same organization.

“I had to become diligent in schoolwork when literally no one was watching,” Malachi said.

Losing his father at four meant Malachi’s mother often had to work multiple jobs, which caused him to spend much of his time alone at home.

Active on campus, some of Malachi’s professional associations included Sankofa, SHPE, NSBE, and ASME. During his junior year, he was the first African American president of the American Society of Mechanical Engineers University of Arkansas chapter. In his tenure as president, he gave students exposure to NASA, Koch Industries, and Walmart. During Malachi’s senior year he helped form a Black Male Initiative (BMI) to mentor new freshmen and sophomore engineering students. BMI serves a big role in making sure students feel welcome and engaged. Malachi’s part=time work as a math tutor and robotics teacher led to a position as a lead teacher for AmeriCorps.

In May 2015, he graduated with dual bachelor degrees in Mechanical Engineering and African and American studies. By the fall, Malachi was enrolled as a Ph.D. candidate in the University of Arkansas educational policy program.

“He gained tremendous respect for the educational system and proves that while reaching back to help younger generations, giving hope and building dreams,” said Dr. John English, dean of engineering at UA.”This experience led Malachi to pursue a career in  education reform policy by combining his engineering background with the desire to make a change in the way STEM is introduced and provided to generations to come,” the professor said.

1. Had a good work ethic
2. Balanced academics and co-curricular leadership activities
3. Talked to professors and Career Development about employment opportunities
4. Attended career fairs
5. Researched positions and employers
6. Did his homework ahead of time