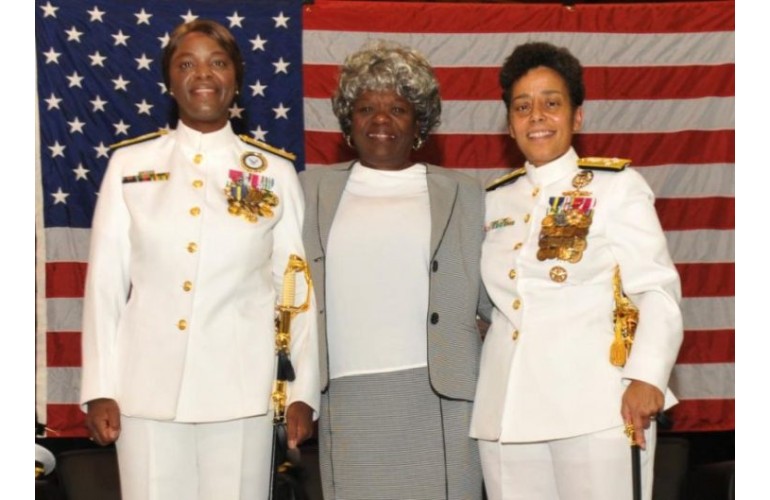 Together they enhance a greater appreciation of U.S. Navy heritage and provide a positive influence toward pride and professionalism in the naval service.

As a Navy Human Resources officer, Rear Adm. Annie Andrews was assigned in areas of manpower, personnel, training, and education. Andrews assumed command of Navy Recruiting Command Aug. 29, 2013. Prior, she served as commanding officer of the Recruit Training Command, Great Lakes. During her tour, she led the training efforts of over 100,000 Sailors for duty in the Fleet and was instrumental in the commissioning of the Navy’s only immersive simulator trainer, the USS Trayer also was known as Battle Stations 21.

On November 1, 2015, Andrews began her federal career as the Federal Aviation Administration, after a 32-year career in the Navy. She provides executive leadership for HR programs and policies, operations, employee and labor relations, corporate learning and development, employee safety, and workers compensation.

Admiral Michelle Howard is the first four-star woman in Navy history. She has achieved many firsts throughout her naval career.

She was the first black woman to command a U.S. Navy ship and the first to achieve two- and three-star rank.

She commanded Expeditionary Strike Group Two from April 2009 to July 2010. In 2009 she commanded Task Force 151, Multi-national Counter-piracy effort, and Task Force 51, Expeditionary Forces. Her shore assignments include senior military assistant to the secretary of the Navy and Chief of Staff to the director of Strategic Plans and Policy, J-5, Joint Staff, deputy commander, U.S. Fleet Forces Command.

Adm. Michelle Howard is a 1978 graduate of Gateway High School in Aurora, Colorado. She graduated from the United States Naval Academy in 1982 and from the Army’s Command and General Staff College in 1998 with a master’s in military arts and sciences. Howard’s initial sea tours were aboard USS Hunley and USS Lexington. While serving aboard Lexington, she received the secretary of the Navy/Navy League Captain Winifred Collins Award in May 1987. This award is given to one woman officer a year for outstanding leadership.

Adm. Michelle Howard is set to retire in January 2018.

Congratulations to all of you!

Congratulations to all! Thier marks upon US Naval history will forever be remembered. FWFS !!

Very impressive group of Lady Admirals. They are to be commended for their honorable service to our country.
Special PROPS to my “Home Girl ” Admiral Lillian Elaine Fishburne from Rockville, Maryland and Richard Montgomery High School.

Congratulations to these three Admirals. We honor your service and Sacrifice….NAVY Proud

Truly Mindblowing! Beyond ! My Sisters In Arms! Blessings! Prayers This Sister Veteran will always a Remember!

I salute you all and very proud of the examples you have set. Thank you.
May God bless you all.

Congratulations to the finest group of Admirals I’ve ever seen.