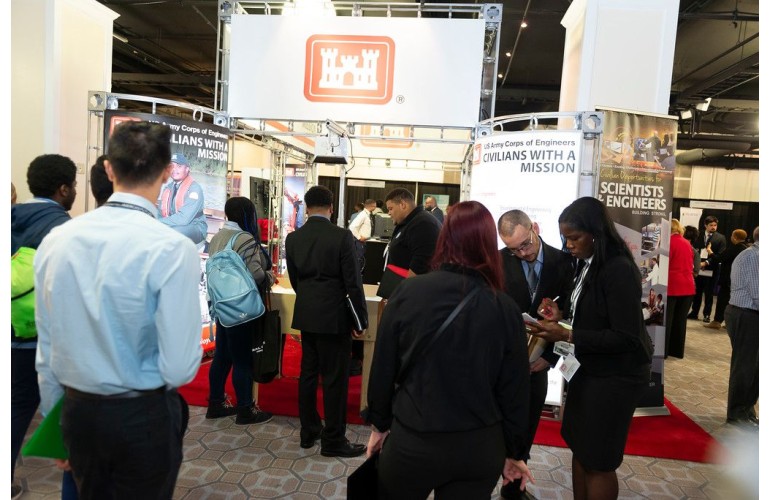 The 2020 BEYA Conference held in Washington D.C. February 13-15 featured a range of industries and agencies in science, technology, engineering, and math (STEM). Among them was the U.S. Army Corps of Engineers, which has approximately 37,000 civilians and soldiers delivering hurricane and storm damage reduction and other services, while using engineering expertise to improve quality of life.

This year’s BEYA Conference attracted thousands of people in STEM. On the career floor were exhibitors from all fields including information technology, engineering, geosciences, life sciences, mathematical sciences, physics, and astronomy. The job fair attracted attendees from across the country.

Also on the agenda of the three-day event in the nation’s capital was the BEYA Gala, where the 2020 Black Engineer of the Year Award (BEYA) was presented. Winners also received various category awards at the BEYA Gala.

One of the Most Promising Engineers in Government awards went to Major Sean Spence (photo inset) U.S. Army Reserve, who serves as a task force engineering plans officer of the U.S. Army Corps of Engineers Task Force Assayance in Iraq. He worked with project engineers, staff action officers, and task force leadership to plan, coordinate, and synchronize engineering efforts throughout the area of operations which included Iraq, Kuwait, and Syria. Maj. Spence is currently a headquarters commander of the 416th Theater Engineering Command. He also consults for Booz Allen Hamilton and holds appointments as an adjunct professor at the University of Maryland and George Mason University.

“A week after high school graduation and two weeks before my eighteenth birthday, I found myself at Basic Training at Fort Benning, Georgia,” Spence said in his acceptance speech. “I had a deep desire to serve my country and a deeper desire not to sit through another boring class in high school. Little did I know that the military was going to give me the discipline and confidence that I needed to earn a bachelor’s, masters and a doctorate degree in engineering. I now consult at a Fortune 500 company, hold adjunct professor positions at two major universities, and command a headquarters company at the 416th Engineering Command as a reserve officer. The engineering profession has blessed me with opportunities I could have never dreamed of and for that, I am most grateful,” Dr. Spence said.

The 2020 Dave Barclay Award for Affirmative Action went to Major Thomas Bishop, a project engineer with the U.S. Army Corps of Engineers. The major has spent over fifteen years as an Army engineer. Starting as an enlisted soldier, Thomas joined the Army at seventeen as a combat engineer. Later he became an Army engineer officer. During that time, he’s deployed to Afghanistan with the U.S. Army Corps of Engineers, conducted engineering projects in the U.S., Central America, Asia, and Europe. Major Bishop chose engineering because of the impact military engineering has on military operations and support to communities. Major Bishop has been at the forefront of mentoring, diversity and inclusion, and stewardship of the engineering profession.

“I have to be honest,” Major Bishop said upon accepting his award. “I didn’t understand the impact of engineering when I joined the Army at seventeen. Over the next decade and a half, through assignments and deployments, I learned engineers do more than what we learn in school. When I became an officer, I got to travel the world and I saw what engineers do in Korea, Central America, Europe, the Middle East, and Africa. But it wasn’t till 2017, here at home, that I realized the real impact of what engineers do. I volunteered to work with USACE when Hurricane Harvey hit Texas. Then Irma hit Florida, and then Hurricane Maria destroyed Puerto Rico. They called the Army Corps of Engineers, and I learned we help rebuild communities, rebuild lives better and stronger than they were before.”

On LinkedIn Jeffrey L. Milhorn, P.E., commanding general at the North Atlantic Division of U.S. Army Corps of Engineers (USACE) posted this message during the event:

“Congratulations to our 2020 BEYA Awardees & Our New Hires! If you’re in or near the Wardman Park Washington Marriott, stop by the US Army Corps of Engineers Recruiting Booth (Section 700 on the Exhibition Floor). WE ARE HIRING! #peoplefirst #winningmatters #armystrong #buildingstrong #usace”

At the conclusion of BEYA 2020, Commander Milhorn said that the Corps of Engineers had signed “68 Tentative Job Offers while taking in hundreds of resumes.” adding, “My Congratulations to the entire US Army Corps of Engineers Recruiting Team and to all of our Future Employees!”