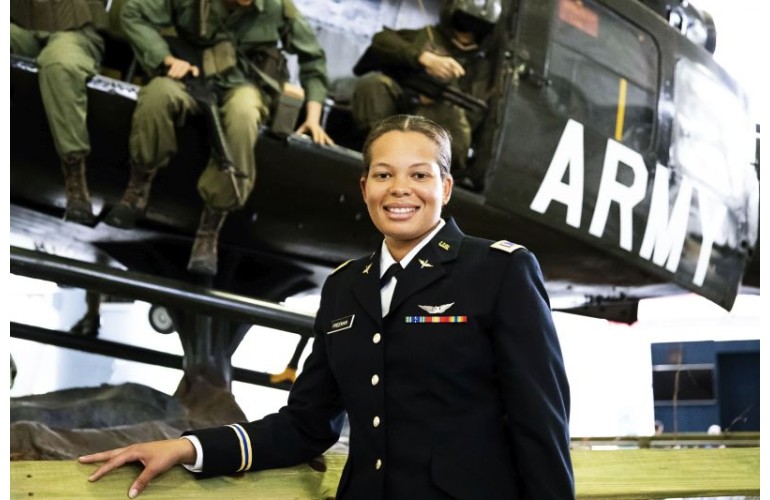 Second lieutenant Kayla Freeman graduated from Tuskegee University in 2016 with a bachelor’s degree in aerospace engineering and went on to make history at the U.S. Army Aviation Center of Excellence in Huntsville, Alabama.

Freeman,  a flight test engineer at the Army Aviation Development Test Activity at Redstone Arsenal in Alabama, told Army news staff that she was honored to have her wings pinned by one of her “main role models” retired Col. Christine “Nickey” Knighton.

Knighton was the second black woman in the Department of Defense to earn her aviator wings.

Brenda E Robinson, who retired from American Airlines after 34 years as a pilot, was the first black woman to earn her wings of gold as a naval aviator.

Before graduating from Tuskegee with a bachelor’s degree in aerospace, aeronautical and astronautical engineering in 2016, Freeman worked as a vehicle mechanic at the Alabama National Guard, where she has been employed as a 2nd Lieutenant since Dec 2016.

She has also interned at Engineering, Research, & Consulting Inc. and UTC Aerospace Systems.  Freeman is an alum of the Army ROTC and a member of the American Institute of Aeronautics and Astronautics – Sigma Gamma Tau

“She is further proof that we don’t see race or gender in the Alabama Guard — we see Soldiers and Airmen and their potential. She has worked very hard to earn those wings, and that’s a great example for all of us.”

Freeman is currently at Fort Hood preparing to deploy as a platoon leader in the Alabama National Guard’s 1-169th Aviation Battalion.

“I just plan to continue to develop my skills as an officer and aviator, as well as mentoring others,” she said.