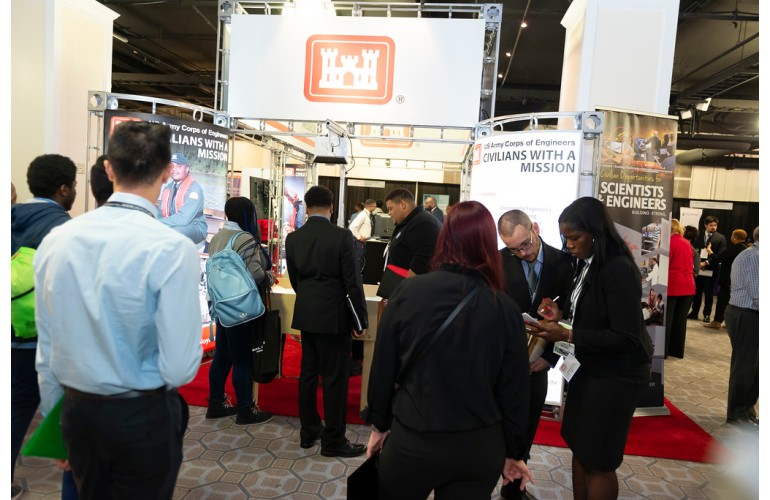 Lieutenant General Todd T. Semonite, chief of engineers and commanding general of the U.S. Army Corps of Engineers (USACE), presented two awards at the BEYA Gala in February. Thomas West, a geotechnical engineer with the U.S. Army Corps of Engineers, was honored with the 2019 Most Promising Engineer in Government Award. The award is given to early-career professionals in the first five years of their career.

Colonel Jason Kelly, who is currently assigned as a commander in the Transatlantic Afghanistan District of the U.S. Army Corps of Engineers,  was honored with the Professional Achievement in Government Award.

“A proven combat engineer and dedicated professional engineer, he has served with distinction as a commander in the U.S. Army Corps of Engineers,” Semonite said at the BEYA gala. “He delivers complex engineering programs, builds cohesive teams and inspires operational teams to lead command in an active combat zone, building critical infrastructure and facilities for the Afghan police, army, and civilian communities.”

Kelly has served in the U.S. Army for 25 years. On a recent assignment, he tackled sea level rise to support a U.S. Navy base, while maintaining navigation for a container vessel fleet. Within the Norfolk Virginia Corps of Engineers District, he helped foster the signing of science, technology, engineering, and math (STEM) agreements with Norfolk State University, Hampton,  Virginia State, and neighboring colleges. Below are excerpts from an interview he gave USBE recently.

As a member of the Norfolk Alumni Chapter of Kappa Alpha Psi Fraternity, I am afforded opportunities to give back. While commanding the Norfolk District (U.S. Army Corps of Engineers) I established a STEM Committee to ensure the talents of 375 employees working in the STEM field were shared with the local community. With the support of employees, I facilitated partnership agreements with Norfolk State, Hampton University, and Virginia State University. I represented the U.S. Army Corps of Engineers at three consecutive Advancing Minorities Interest in Engineering Annual Conferences and worked to help the North Atlantic Division hire interns and students from the program.

I’m from Michigan. To this day, I still get excited about a nice car. When I was in middle and high school, General Motors had a program with the Flint Public School System, where inner city kids were exposed to the science that underpinned Vehicle City and the factories that put food on so many tables. So perhaps that exposure and playing to my strengths set my course.

As a young man, I was unsure of what I wanted to do. After attending the U.S. Military Academy, I had an active duty service obligation. At the conclusion of five years, I intended to join corporate America. I was convinced that money talked, but then I fell in love with service. My wife Stephanie is my best friend. And despite time spent overseas and travel to execute my duties, I have a great relationship with (our) 19-year-old and 13-year-old.

My entire adult life has been spent in service to the nation. I’ve commanded organizations at every echelon available to a Colonel in the United States Army.

I’ve been afforded the opportunity to make contributions to the health, welfare and successful mission execution of Soldiers and Civilians in peace and war. I’ve been on some good teams, the Army Team being the greatest of them all. On every team, I’ve tried to be a good leader, mentor, and coach. As I age, there are more yesterdays than tomorrows in uniform. I intend to remain ready to contribute wherever the Army’s senior leaders see fit.

I recently read a quote by Fred Rogers, ‘You rarely have time for everything you want in this life, so you need to make choices.’ Hopefully, your choices can come from a deep sense of who you are. I do my best to make good choices.

Colonel Kelly graduated with a bachelor’s degree in mathematical sciences from the U.S. Military Academy at West Point. He has also earned a number of master’s degrees, in engineering management from Missouri University of Science and Technology,  in statistics from Georgia Institute of Technology, in joint campaign planning and strategy from National Defense University, and in strategic studies from the U.S. Army War College.