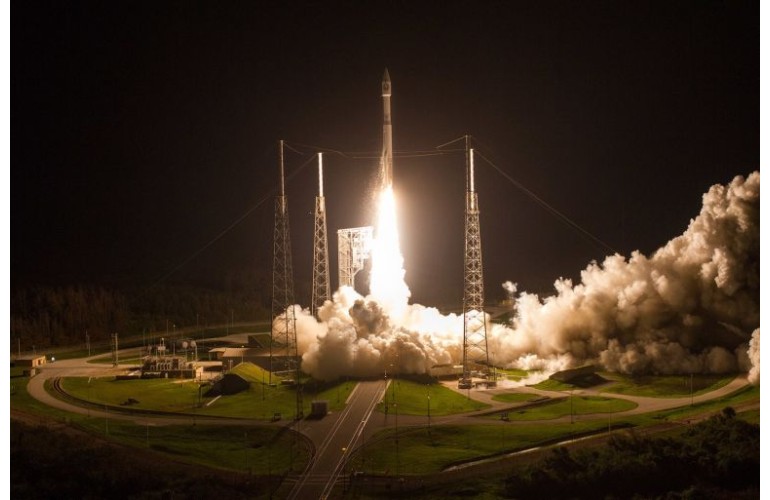 Designated NROL-52, the mission is in support of national security.

“Today’s launch is a testament to the dedication of the ULA team, demonstrating why ULA continues to serve as our nation’s most dependable and successful launch provider,” said Laura Maginnis, ULA vice president of Government Satellite Launch.

Parker is an aerospace engineer and the team lead for the challenging career path of fiber optics research in the Neil A. Armstrong Flight Research Center, NASA’s center of excellence for atmospheric flight research.

A key objective of space research at Armstrong is to discover innovative ways to use aircraft to develop new space capabilities and to test space technologies in a relevant environment.

NASA researchers became interested in fiber optic sensing technologies in response to the Helios solar electric airplane that broke up in mid-air and crashed into the Pacific in 2003. Engineers believed that a fiber optic-based system could have sensed wing deformation in flight. Prior to the Fiber Optic Sensing System, it was impossible for operators to know that wings were experiencing strain. Now, thanks to the system’s real-time monitoring capabilities, the bending modes of aircraft and launch vehicles during flight can be tracked and, therefore, controlled to avert tragic accidents.

Parker has been a mentor to science students at University of California, Los Angeles, implementing a program that gives students an opportunity to help build experiments flown on the International Space Station to test new technologies.

Through the program, Allen has been able to extend NASA internship positions to promising students, mentoring them on all aspects of building a science experiment to be flown in space, such as mechanical and electrical design, writing software, and analyzing experiment data.

The program, which is funded by the U.S. Air Force and NASA Armstrong, has resulted in two science experiments that have flown on the International Space Station, and a third experiment in the spring of 2017.

United Launch Alliance has delivered more than 120 satellites to orbit that provide critical capabilities for troops in the field, enable personal device-based GPS navigation, aid meteorologists in tracking severe weather, and unlock the mysteries of our solar system.