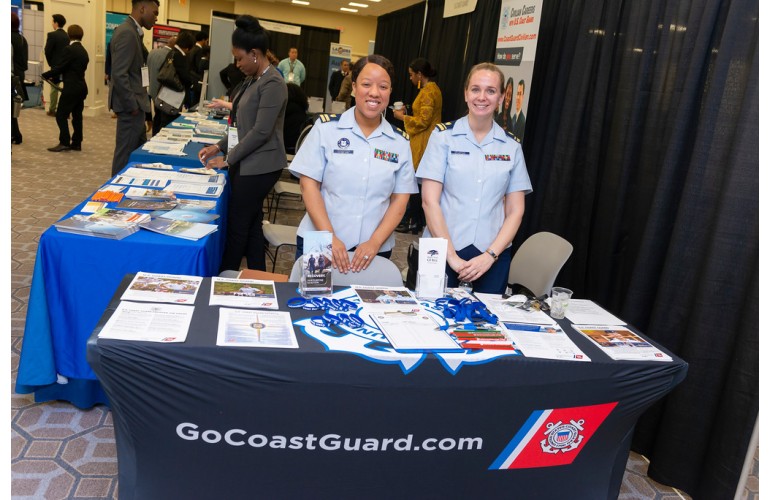 August 4 is National Coast Guard Day and to thank, honor and celebrate Coastguardsmen, USBE Online has produced excerpts from an interview with Admiral Karl L. Schultz,  26th Commandant of the U.S. Coast Guard. The article was first published in USBE magazine’s Veteran issue.

The military service’s top officer, Admiral Schultz leads nearly 42,000 men and women defending America’s borders, rescuing citizens in peril, and protecting the maritime transportation system and the environment. Previously, as commander of Atlantic Area, he was the operational commander for all Coast Guard missions spanning five Coast Guard Districts and 40 states.  He served as director, Department of Homeland Security (DHS) Joint Task Force-East, responsible for the Southern Border stretching across the Caribbean Sea and Eastern Pacific Region, including Central America.

Eight years into his career—after spending six of them on ships sailing North and South Carolina, the Florida Straits, the Caribbean and off the coast of Colombia, fighting the war on narcotics being smuggled into the US, Adm. Schultz returned to the Academy for a master’s degree in public administration.

“If you’d asked a former undergraduate engineer, back in my cadet days, whether I’d be working in public administration, I’d have told you no. What I found as an officer is that I liked front-line operations. Solving difficult problems that the Coast Guard dealt with as an agency, and as part of the larger federal government. That was very attractive to me,” he explained.

In Miami, he worked in one of the busiest command centers of the Coast Guard at the time. Beyond what he had done as a sailor, there was exposure to regulatory functions, large cruise ships, the maritime industry, shore-based rescue, inter-agency partnerships with Customs and Border Protection, and the former INS, now part of border protection.

After earning his master’s degree in 1992, the admiral spent some time as a liaison officer working at the State Department, doing legislative and governmental affairs work for the Coast Guard on Capitol Hill. In the aftermath of the 9/11 terrorist attacks on America, Adm. Schultz was part of the transition team that orientated the Coast Guard from the Department of Transportation to the new Department of Homeland Security.

“That was a very influential period in my development,” he said.

Fifteen years on, he notes the Coast Guard is well-positioned within the Department of Homeland Security.

“We enable 4.6 trillion dollars of economic activity on an annual basis. We fuel the nation’s prosperity with our mission on the emerald waters. The nation has 361 seaports. We work security in the facilities of those ports, arriving ships, departing ships, and, we are a recognized leader.  We have a large voice in the United Nations when it comes to global maritime issues,” the admiral said proudly.

On the home front, Adm. Schultz oversaw Coast Guard-rescue and recovery efforts for hurricanes Harvey, Irma, Maria, and Nate in 2017. During an equally devastating 2018 hurricane season, he has led rescue and recovery efforts in North Carolina and the Florida Panhandle. The admiral’s strategic plan revolves around having a force that is ready, relevant, and responsive to the American public.

‘An employer of choice.’

As the Service Chief of the Coast Guard, Admiral Schultz is committed to making significant progress with Diversity and Inclusion initiatives across the Coast Guard workforce comprised of nearly 42,000 active-duty members, 6,200 Reservists, 8,650 Civilians, and 24,500 volunteer Auxiliarists.

Along with growing diversity is having a robust inclusion policy that ensures the organization provides officers and civilians, 30 percent of which are minorities, enterprise-wide advancement, promotion, and progression.

“As the Commandant, we want to attract people to the Coast Guard, be an employer of choice. But it is a competitive environment; unemployment is low. You can make more money and benefits than what we do, but service, to me, is a calling. Whether it’s peace or war, we have missions going on all the time as a member of the DHS. Whether that’s stemming the flow of drugs, rescue work, regulatory work or supporting operations in all the regions of the Department of Defense,” he said.

To support the Coast Guard’s efforts in developing and sustaining an inclusive workforce that recruits and retains the best and brightest for the 21st century, the Coast Guard’s Chief Diversity Officer formed an Affinity Group Council (AGC).

The council is proactively and independently advising Coast Guard leaders on matters that support an inclusive total workforce. The AGC is a body designed to assist the organization with the overarching goal of increasing the diversity of the Coast Guard’s total workforce and raising the level of inclusiveness across the Service for all members.

The five specific responsibilities of the AGC are: serve as advocates, provide broader networking, serve as a point of connectivity, serve in an advisory nature, and contribute to a collaborative community of learning.

Recently, the Coast Guard contracted with the RAND Corporation to conduct a study to identify the causes of high female attrition in the Coast Guard and develop recommendations that will help mitigate identified barriers to women’s retention.

Nearly 200 focus groups were conducted in every district and Headquarters from January to May of 2018 with over 1100 participants. The results of this study are anticipated in February 2019.

To prepare for the findings and recommendations, a Personnel Readiness Task Force (PRTF) was formed. Also, the PRTF will conduct a review of the talent management policies, practices, and systems impacting the total workforce. The PRTF will evaluate and implement recommendations from previous studies and current surveys, to include the Women’s Retention Study and Holistic Analysis.

“In the last ten years, we’ve grown our female enlisted workforce from 11 percent to 14 percent,” the admiral said. “Our female officer population has grown from 15 to 20 percent. I’d say a positive trend is that 40 percent of our commissioning cadets are female.”

The Commandant signed the first-ever memorandum of understanding (MOU) with the Women’s Leadership Initiative (WLI) and renewed the current MOU with the National Naval Officers Association (NNOA). Both agreements establish the framework for a cooperative relationship with the purpose of achieving mutual organizational goals while providing professional development to the total workforce.

In May 2018, the Coast Guard graduated the largest class of African American officers. There were eighteen black cadet graduates, more than four times the number that graduated in 2017. The admiral notes that underrepresented minorities make up 32 percent of the total number of enrolled cadets in the Class of 2019, rising year on year to 36 percent for the Class of 2022.

“Our work in progress is increasing the number of underrepresented minorities,” said the admiral.

The Coast Guard has a College Student Pre-Commissioning Initiative (CSPI) designed for motivated individuals who demonstrate a high caliber of academic and leadership excellence and desire to serve their country in the United States Coast Guard. CSPI is available to students attending Historically Black Colleges and Universities, member schools of the Hispanic Association of Colleges and Universities, and other approved institutions of higher learning.

“It was my high school basketball coach who introduced me to the concept of the service academy, specifically the Coast Guard,” Adm. Schultz said.

“I had a chance to watch the team play and talk to the coaches. What I saw interested me. I was also interested in engineering at the time and with their STEM (science, technology, engineering, and math) program. It was too good a deal not to put in my application.”

Affinity groups and community outreach help the Coast Guard expand its impact around the country.

“We have a multitude of partnerships that support STEM education where Coast Guard men and women go out in the classrooms of local schools K-12, the admiral said. “Our men and women work with schools in studying the oceans, waterways, and ecosystems to get students excited’ about military STEM careers.

There are also plans for a national Coast Guard Museum on the New London waterfront and one program envisaged is a Discovery Center for exploratory, hands-on work and maybe some simulators. Cadets are also inspired by work with Robert Ballard, who discovered the Titanic wreck, on a ship that explores the Great Lakes. The experience also comes with community outreach excursions, enabling cadets to engage the public and spread the word about service academies, specifically the US Coast Guard Academy.

Coast Guard sources say the most significant validation of these programs is what senior officers with STEM degrees are doing in the Service.

For example, Marine Engineers and Naval Architects assigned throughout the Coast Guard’s Acquisition and Engineering Directorates at Headquarters are positioned to have direct and positive impacts on the outcomes of its multi-billion-dollar fleet-wide re-capitalization efforts. They are program managers for the construction of the new Fast Response Cutters, National Security Cutters, and Offshore Patrol Cutters. Others are members of our Coast Guard ship design teams. Others still are involved in executing construction designs of Coast Guardinfrastructure resiliency following significant damages from the devastating 2017 hurricane season—the Coast Guard received $835M in hurricane damage supplemental funding by Congress.

As the Coast Guard looks to a future with the Blended Retirement System, industry recruiting top talent, and new generations with different priorities, Admiral Schultz is committed to ensuring the Coast Guard is an “employer of choice.”

Upon assuming the duties of the Commandant in June 2018, Admiral Schultz’s Early Action Items were the first step in that direction, and several improvements have already reached the workforce.

“We need to look for solutions to enable our young members to develop professionally and personally, provide them the new flexibility to serve, ensure they are receiving proper resources to do their jobs effectively, and ensure family and health care needs are met. A healthy organization resolves the balance between readiness and operations, which must be welcomed at all levels of the chain of command,” he said.

“We protect those on the sea, we protect America from threats delivered by sea; we protect the sea itself.”
– Admiral Robert J. Papp, Jr., 24th Commandant of the U.S. Coast Guard