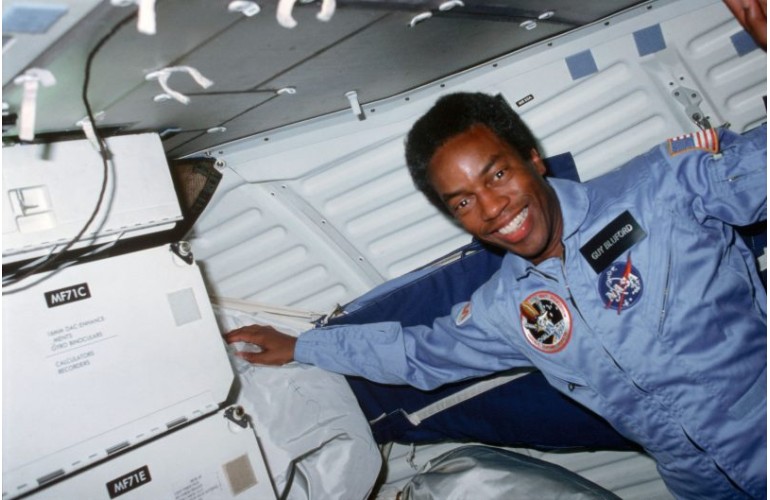 As NASA marks the journey that landed a man on the Moon in July 1969, US Black Engineer takes a look back at the history of African American astronauts in space.

He also revealed the forgotten stories of students from the engineering school at Southern University–Baton Rouge: Seven trailblazing black engineers at NASA Marshall in 1964.

In NASA’s Astronaut Class of 1978, the first group since the Apollo 11 moon landing, three African Americans (shown above) played a prominent role. The group was chosen from ten thousand applicants and part of the most diverse astronaut class ever.

Guion Bluford (sitting) became the first African American man to go into space. In an August 2013 interview with NASA, Bluford said it took him a while to recognize the significance of his selection to be the first African-American in space.

“I wanted to set the standard, do the best job possible so that other people would be comfortable with African-Americans flying in space and African-Americans would be proud of being participants in the space program and… encourage others to do the same,” said Bluford, the 1991 Black Engineer of the Year.

“When I was a kid, space did not exist…astronauts were Flash Gordon and Ming. My goal in life was to be an aerospace engineer. Along the way, I joined the Air Force and became a pilot and eventually an astronaut.” –Read the full interview Tyrone  Taborn had with Guy Bluford on pages 51 and 52 of US Black Engineer magazine’s 1991 Conference Issue.

Two years later he was selected to serve as a mission specialist aboard the U.S. Challenger. He was killed when the space shuttle exploded soon after it launched. After his death, members of Congress provided funding for the Ronald E. McNair Post-Baccalaureate Achievement Program. Their goal was to encourage students from underrepresented ethnic groups to enroll in a Ph.D. program and pursue an academic career. This program is dedicated to the high standards of achievement inspired by Dr. McNair’s life.

Fred Gregory (right) logged 455 hours in space. He was the first African American to pilot and command a Space Shuttle mission.

Later in his career, from 1992 to 2001, Gregory held the position of associate administrator, Office of Safety and Mission Assurance, at NASA Headquarters. He was responsible for assuring the safety, reliability, quality, and mission assurance of all NASA programs. In August 2002, Gregory was confirmed by the Senate as NASA’s Deputy Administrator, the first African-American Deputy Administrator. As Acting Administrator, Gregory led the NASA team and managed its resources as NASA advanced The US Vision for Space Exploration. He resigned from NASA on Nov. 4, 2005.

“Growing up…I was just like every other kid. I loved space, stars, and dinosaurs. I always knew I wanted to explore. At the time of the Apollo airing, everybody was thrilled about space, but I remember being irritated that there were no women astronauts. People tried to explain that to me, and I did not buy it.”

African Americans who have traveled into space