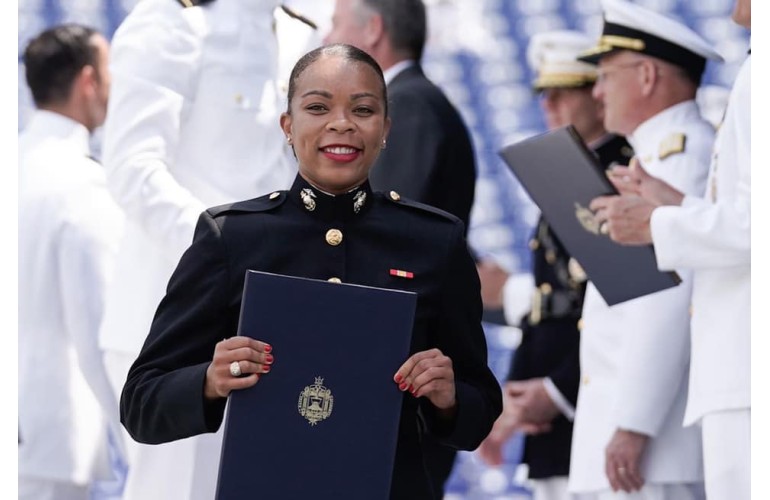 In “A Weekly Conversation; On the Line” posted to social media Saturday, Vice President Kamala Harris sat down with Midshipman Sydney Barber, a mechanical engineer and the first Black woman to be selected as a Brigade Commander at the U.S. Naval Academy.

Barber told the vice president that although she had different ideas of where her passion for humanitarian service might lead, becoming the first Black female selected by the United States Naval Academy to be the Brigade Commander was never one of them.

“I took a leap of faith when I decided to put my hat in the ring,” Barber said about her decision to run for the highest position of leadership in the Brigade of Midshipmen. “I know what it’s like to be the first but I certainly do not want to be the last,” she added during the conversation with Vice President Harris, who herself made history again this weekend.

Harris delivered the keynote address for the United States Naval Academy Class of 2021 on Friday, May 28. She is the first woman to do so in U.S. history. The event was streamed live on YouTube.

During the almost three-minute online conversation, Harris shared photos of the midshipman’s six-stripe shoulder boards on display in the Office of the Vice President. The citation reads in part “Sydney Barber Shoulder Boards USNAM T/2021. Gift of Midshipman Sydney Barber.”

In the 44 years that women have attended the Naval Academy, Barber is one of 16 female commanders and the first African American. She stepped into the role in January and oversaw roughly 4,000 students at the academy.

“You started a whole program to mentor around STEM (science, technology, engineering, and math),” the vice president went on. “Talk to me about all of that.”

Barber said working with young people in Annapolis stemmed from her engineering pursuits.

“Many of the children around here live in housing projects,” Barber told the vice president. “Probably two or three blocks from the Naval Academy, which is one of the top engineering schools in the country. There are kids who will never have the opportunity to come here just because of the disparities.”

Barber stressed the importance of being a part of a community and serving as a mentor and role model. “For them to see that someone who looks like them could also be Black, beautiful and brilliant.”

Barber said she would not be where she is today if someone had not seen the potential that she didn’t see in herself.

“You have impacted more people than I think you will ever understand,” Harris said. “By your determination, by your brilliance, by your dedication, by your discipline. You have done so much that’s going to impact people you may never meet,” the vice president noted. “It’s really extraordinary what you’ve done.”