Wilhelmina Pierce: Opening Doors for Women in the Corps of Engineers 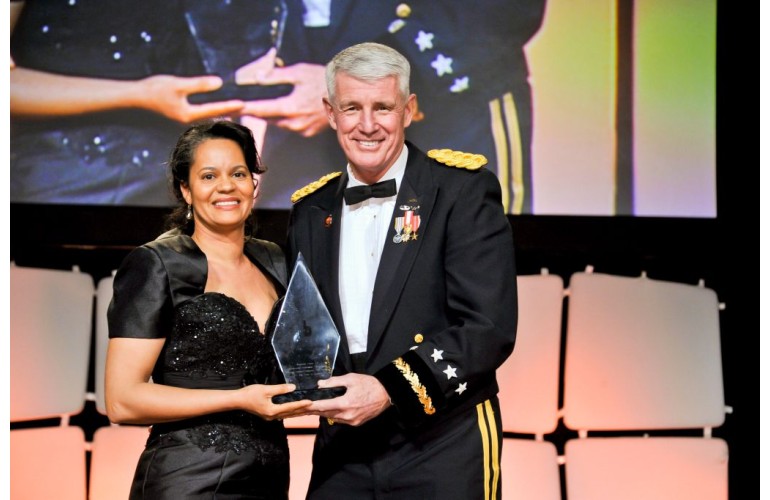 In 1992 The Washington Redskins beat the Buffalo Bills in Super Bowl XXVI, “The Silence of the Lambs” won Best Picture at the Academy Awards, and Wilhelmina Pierce joined the U.S. Army Corps of Engineers.

By 2011, when Pierce received the Professional Achievement Award at the 25th annual BEYA STEM Conference from Lt. Gen. Robert L. Van Antwerp, then chief of engineers of the United States Army and commanding general of the U.S. Army Corps of Engineers (USACE), Pierce had supported the Army, Air Force, and Special Operations during peacetime and war in three countries.

Pierce was the first African American woman resident engineer in the USACE’s Savannah District. She blazed trails in an area where women made up only 12.5 percent of the second-largest engineering discipline, and even fewer still are recognized as professional engineers.

Currently, the U.S. Army Corps of Engineers has approximately 37,000 dedicated civilians and soldiers delivering engineering services to customers in more than 130 countries worldwide.

‘Blazing Trails for Women in Engineering, Design and Construction Management‘

A certified professional engineer, she managed high-security projects for Special Operations forces, such as the troops engaged in combat in Afghanistan.

Pierce worked on projects close to what officers call the “sharp end” of the warfighter’s spear.

After beginning her career as a building system engineer with the North Carolina Office of State Engineering in 1987, she took on advocacy for diversity.

During 1990 and 1992 she traveled across the state of North Carolina raising awareness of inclusion in government contracting and new opportunities for small and minority business owner.

Pierce served as a member of a women’s organization committed to enriching the cultural development of African Americans. She was also a long-term supporter of a scholarship fund administered by the Occaneechi Band of the Saponi Nation, a small Indian community located primarily in the old settlement of Little Texas, Pleasant Grove Township, Alamance County in North Carolina.

A longterm member of the Regional Council for the Advancement of Minorities in Engineering, she also volunteered with MATHCOUNTS, a non-profit organization that reaches students in grades 6-8 in all US states and territories with three extracurricular math programs.

BEYA offers opportunities for students exploring STEM career possibilities to those who are already pursuing studies in a STEM discipline.