Without a Net: The Digital Divide in America 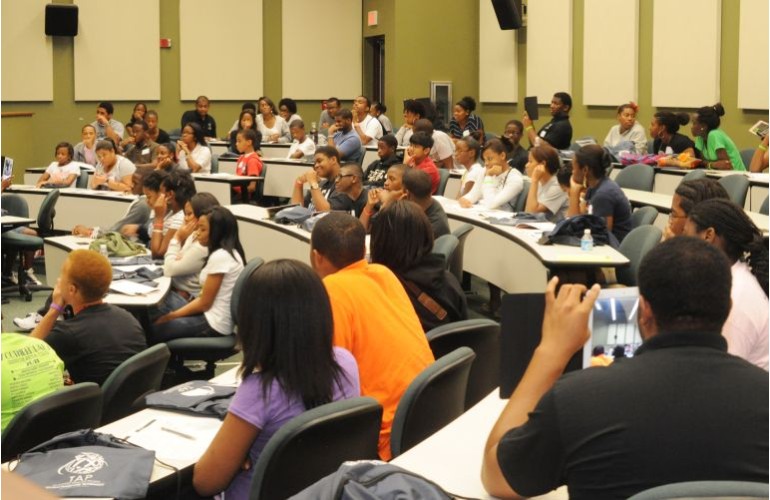 Without a Net: The Digital Divide in America, a new documentary on National Geographic at 10 pm. ET on Tuesday, September 26, reveals the deep inequalities in technology resources within America’s education system.

The film, narrated by Academy and Grammy Award winner Jamie Foxx spotlights the ‘have’ and ‘have-nots’ as it relates to technology in classrooms, and presents the emotional and economic impact on students who lack access.

The documentary from Academy Award® nominee Rory Kennedy and Verizon presents in-depth interviews with students, parents, educators, administrators and learning experts across the U.S., and the frustrations, anxieties, and challenges of trying to create a modern, tech-focused learning environment to ensure students are prepared to join the global digital workforce.

Education experts weigh in on the serious inequalities in access and funding, as well as the need for multi-faceted solutions to close the technology gap.

“In today’s world, lack of technology skills is similar to not knowing how to read or write, especially when you consider that the majority of jobs in the future will be technology-based,” said Diego Scotti, chief marketing officer, Verizon.

“Partnering with Rory Kennedy to bring this documentary to life made sense because she’s been at the forefront of social issues for decades. Our hope is that this documentary will bring awareness and spark dialogue on this serious issue that is impacting the success of kids in rural, suburban and urban communities across the U.S.”

Making Without a Net

Rory Kennedy, producer, and director of Without a Net: The Digital Divide in America was inspired to make the film because “the stories of these students, parents, and teachers need to be seen and heard, and most people don’t realize this is happening right in their backyards,” she said

“Through the making of this film, I became encouraged by the work that both not-for-profits and private corporations, like Verizon, have been doing over the last decade to get technology education and resources in middle schools across the U.S. to help close the digital divide,” Kennedy added. “But the reality is that this crisis demands broader support and the documentary conveys the profound need for more people to get engaged across different sectors.”

Verizon has a longstanding commitment to helping close the digital divide, having committed more than $160 million over five years to bringing free technology, free access, and immersive, hands-on learning to schools in disadvantaged areas across the U.S

Over the last two decades, Verizon has worked with companies such as Career Communications Group, Inc.

Each effort was dedicated to a month of driving TAP communication to help families focus on a dual message: (1) the importance of technology in their everyday lives, and (2) the importance of technology in the education and career preparation of their children. Particular attention was given to low-income families, as there was a persistent “digital divide” among this population.

“In recent years, studies and reports have exposed the gap between blacks and whites in computer ownership and Internet access. Both are important subjects, but narrow in their scope. More recently, the discussion has advanced to digital inclusion,” said Taborn.

“Global forces in technology, research, science, and telecommunications make it clear that the future will not hold much promise if the trends that limit participation are not reversed. Young people entering an information-based, technology-driven marketplace without the necessary skill sets will not only be unemployable, they will be irrelevant,” he said.

There are a handful of intriguing points with time in this post but I don’t know if I see them all center to heart. There’s some validity but I am going to take hold opinion until I look into it further. Good article , thanks and now we want more! Put into FeedBurner also