Year round, engineering deans work to bring students to STEM 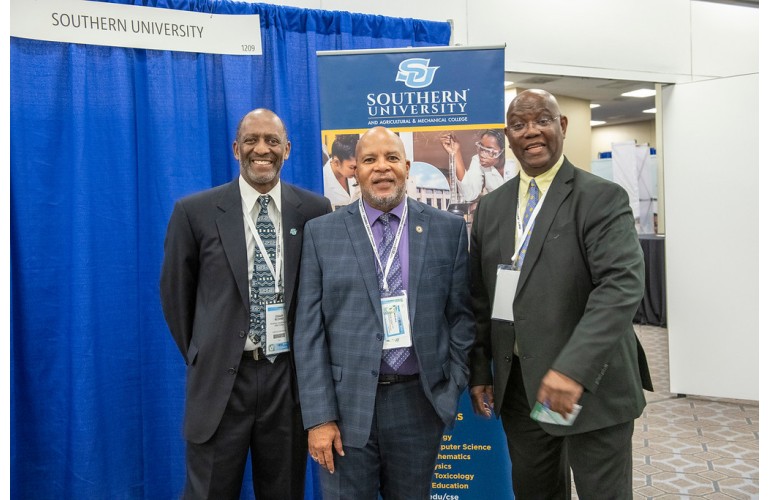 According to the National Association of Colleges and Employers (NACE), 99% of college offices are now interacting virtually. Building relationships is key to building a pipeline for the future, according to Dr. Patrick Carriere, dean of the College of Sciences and Engineering at Southern University and A&M College.

Dr. Craig Scott, interim dean of Morgan State University’s School of Engineering, said nothing takes the place of the hard work involved in visiting high schools and meeting with students. “We cannot afford to wait for our students to come to us,” said Scott. “We have to go to them.”

At Hampton University’s School of Engineering and Technology, Dr. Joyce T. Shirazi said they’ve found success by attending high school track meets and other events where teens gather. Alumni meetings also have proved to be a good resource for recruitment, she said.

Computer science boot camps are among the approaches that Howard University has taken, according to Dr. John M. M. Anderson, interim dean of the College of Engineering and Architecture.

“We lose 50 percent of our students in the first year,” he said, adding that many are “ill-prepared in math. They don’t have the foundation.” The school provides tutors and coaches to help build that foundation. “Retention is cheaper than recruitment,” he said.

Dr. Dawit Haile, dean of the School of Engineering, Science and Technology at Virginia State University, said VSU is taking many of the steps that the other deans mentioned and is also pursuing “non-traditional” students, specifically veterans who are transitioning to civilian life.

Colleges and universities are taking various approaches to battle the decline in enrollment of students pursuing STEM careers. Dual enrollment programs, STEM academies for middle school students, community college partnerships, nanotechnology days, and other outreach programs are among the strategies they are employing.

At a recent gathering of deans of historically Black colleges and universities, Norma Clayton, chair of the board of trustees at Tuskegee University, asked the leaders about innovative intervention strategies they’re utilizing to address this concern.

Dr. Pamela Obiomon, dean of the College of Engineering at Prairie View A&M University, said the school has a multi-pronged approach. It includes going after students who would not normally major in engineering as well as pursuing students who are interested in other schools. However, Prairie View’s main focus is on retention.

At Jackson State University, Dr. Wilbur Walters, dean of the College of Science, Engineering, and Technology, said that although many other institutions have been experiencing declining enrollment, “our engineering program in the last five years has grown at double digits.” Even so, the school is taking steps to be even more appealing to a larger population.

Jackson State University officials eliminated out-of-state fees “to make Jackson State affordable for its students,” Walters said. The Mississippi school also has focused on its local student population as a recruitment source. “If we don’t grow the students in our own local urban population, we are doing a disservice,” said Walters.

At the University of the District of Columbia, while the number of international students has decreased, the school has had a jump in its incoming students from within Washington, D.C.

Dr. Devdas Shetty, dean of the School of Engineering & Applied Sciences at the University of the District of Columbia, said that thanks to aggressive recruiting, the school has experienced a 15 percent annual increase of students from D.C. each year for the past three years. Many of those students are minorities, he said. Through funding from the U.S. Air Force, the school also brings teachers to the University of D.C. campus for a week to focus on chemistry and materials science. The idea is for the teachers to go back to their schools and share some of the “very exciting experiments” and, experiences they’ve had with their students.

Tuskegee University offers two summer minority introduction to engineering programs for students in the ninth, 10th, and 11th grades. Dr. Heshmat Aglan, dean of the College of Engineering at Tuskegee University, said the program attracts young people from across the country and involves exposure to all engineering departments, visiting local industries, hearing from guest speakers, hands-on activities, and time spent with role models. Some of these participants apply to and are accepted at Tuskegee as incoming freshmen, he said.

Dr. J. Murray Gibson, dean of the College of Engineering at Florida A&M/Florida State University, emphasized all schools must identify a unique characteristic and make it a marketing and selling point. He said the student body makeup of the two schools is Hispanic, African American, Caucasian, and Asian, and closely reflects the country’s citizenry. “That brings soft skills for all our students whether majority or minority, learning how to work across cultural boundaries,” said Gibson.