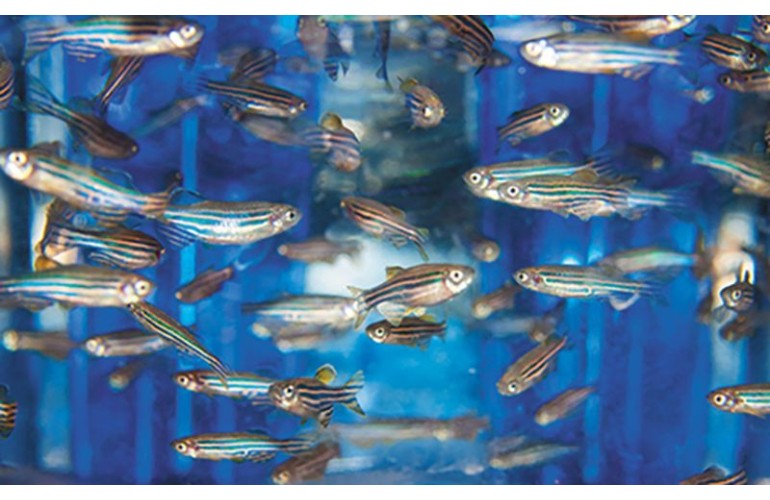 Dr. Tracy Bell, a biology professor at the University of Maryland Eastern Shore (UMES), has been awarded a $299,996 National Science Foundation (NSF) grant for research on the kidney functions of zebrafish.

Doing necropsies on small organisms, “requires a lot of patience and concentration,” Bell said. “Hopefully, by studying the zebrafish as a model, we’ll be able to get a better understanding of vertebrate kidney function.”

In collaboration with Dr. Linda Johnson, Bell used the NSF funding to build a three-dimensional wall of aquariums in a lab at the George Washington Carver Science Hall. The 10-gallon fish tanks can house upwards of a thousand zebrafish.

“The goal is to investigate the role of insulin in regulating sodium and water transport in the kidney,” Bell wrote in her grant application.

The NSF program that awarded Bell the grant is designed to support young faculty members just starting their teaching and research careers. Bell joined the UMES faculty in 2014 in her first full-time teaching position.

“The idea is to get them in the lab and give them the tools to get to the next level” of academic achievement, Bell said.

Bell’s project might provide a better understanding of how the kidneys regulate sodium and water balance and in turn, maintain good blood pressure. The flat kidneys of the 2-inch long tropical fish share similar “homology” traits as the bean-shaped organs in humans.

Using zebrafish as a model of vertebrate development, researchers at Washington University in St. Louis recently mapped changes in the epigenome of whole embryos.

“The human genome, like the zebrafish genome, is epigenetically regulated,” said one researcher.

I was diagnosed as type 2 last year, my weight was 125kg, my doctor wanted me to start insulin and encouraged a diet with an alarming amount of carbs, so I went to boots and bought a blood sugar tester that I used every day, and started on a Atkins type diet. I.e no carbs….. and when I say no carbs I really mean none. So lots of meats and fish, eggs etc. I also got some useful information here http://mydiabetesway.com/15-easy-ways-to-lower-blood-sugar-levels-naturally I gradually started loosing weight at a rate of 3kg per month and Im now 94kg, I have never taken insulin and in a few months I will be my target weight. my lifestyle can never go back to carbs, but I can have some nowerdays without my blood sugar increasing, so if I want a curry I can have a Nan bread with it but no rice chips etc. And to be honest when you cut out carbs you can eat a lot of really tasty things that help lose weight a fry up without the beans is fine, lamb chops and kebabs without the bread etc. The only downside is because of the extra fat intake I need to be doing daily cardio. I really believe doctors are offered too many incentives by drug companies and tend to love writing prescriptions instead of encouraging a positive change in our lifestyles.