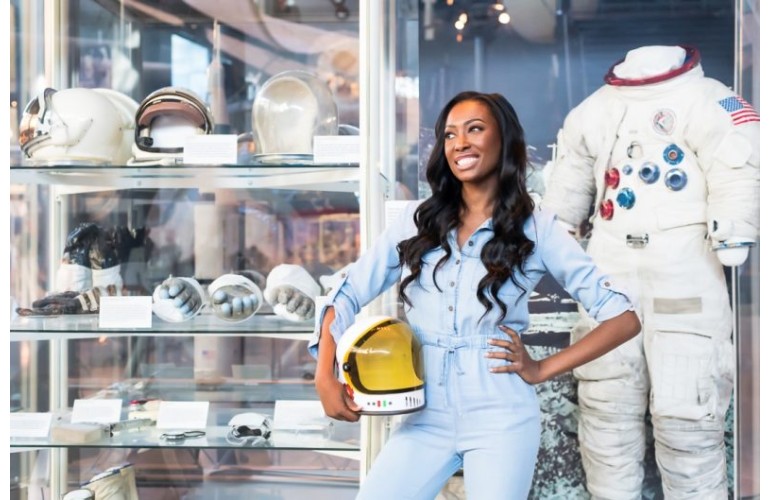 Former NASA rocket scientist Aisha Bowe is manifested on a future flight of New Shepard. She is the first Black woman confirmed to travel on a commercial flight to space with Blue Origin, the spaceflight company founded by Jeff Bezos. New Shepard is a reusable suborbital rocket system named after astronaut Alan Shepard, the first American to go to space.

Bowe is expected to be the sixth Black woman to cross the Kármán line, the internationally recognized boundary of space. Her flight is announced 30 years after former NASA astronaut Mae Jemison became the first Black woman to travel to space in 1992.

Since Jemison, there are only four other Black women who carry that distinction: NASA astronauts Stephanie Wilson, Joan Higginbotham, Jessica Watkins, and Dr. Sian Proctor of the SpaceX Inspiration4 Mission.

“I’ve dedicated my life to helping people break stereotypes,” said Bowe. “I am honored to follow in the footsteps of these pioneers as we begin to realize the potential of public access to space.”

Advised to study cosmetology by a high school guidance counselor, she instead chose to study mathematics at Washtenaw Community College in Ann Arbor before transferring to the University of Michigan earning both an undergraduate and master’s degree in aerospace engineering. She worked for NASA as a rocket scientist and served as State Department global speaker, inspiring students around the world.

Bowe is also an accomplished serial entrepreneur. Recognized on Inc.’s fifth annual Female Founders 100 list, honoring a bold group of 100 women whose innovations and ideas are shaping the world into a better place, Bowe is the founder and CEO of STEMBoard, an award-winning tech company ranked on the Inc. 5000 list of fastest growing companies in America.

She also shares the distinction of being one of a select group of women of color who have raised over $1 million in funding. Bowe’s venture-backed LINGO, a hands-on, self-paced coding kit that enables students to learn how to code at home is sold on Amazon, Target, and Walmart.

In 2013, Bowe moderated a panel of federal scientists and engineers at the BEYA STEM Conference and received a Special Recognition award celebrating her promotion of STEM to historically underrepresented groups.