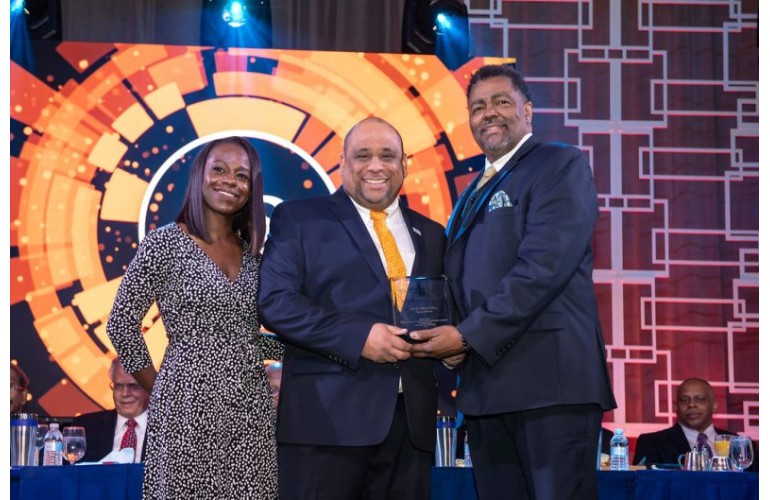 The 2020 Dr. Mark Dean Legacy Award went to William Green, a senior technical staff member, and IBM Master Inventor.  The award was presented by Drew Valentine (right), who received the Dave Barclay Affirmative Action Award at the 2018 BEYA Conference for being ‘a strong pillar in the diversity space.’

“I have the honor of presenting the Dr. Mark E. Dean Legacy Award,” Valentine said at the Engineering Dean’s Power Breakfast at BEYA in February.

Dr. Dean, the 2000 Black Engineer of the Year, is “credited with helping develop landmark technologies, including the color PC monitor, the Industry Standard Architecture system bus and the first gigahertz chip with engineer Dennis Moeller that allowed for computer plug-ins such as disk drives and printers,” Valentine said.

“Our award recipient Bill Green is a technical consultant and expert to IBM senior management for several aspects of the end-to-end supply chain,” Valentine continued. “He is currently the technical lead for the integration of IoT technology in tracking IBM products globally. In his 22 years, Bill created IBM’s Packaging Sustainability Strategy that has eliminated 8700 tons of packaging waste. He was elected to the Board of Directors for the International Safe Transit Association. He became an IBM Master Inventor for his ongoing leadership in innovation with 12 patents awarded. And he is a passionate mentor and coach.”

In his acceptance speech, Green (center) said he stood behind a long legacy of achievement at the 108-year-old IBM Corporation.

Paying homage to his own mother, he said that although she was not at IBM,  her service as senior vice president of the Detroit Medical Center showed what true leadership meant.

“My fervent hope is that I can honor their fine legacy and pass it along for others that will follow behind me,” Green said.