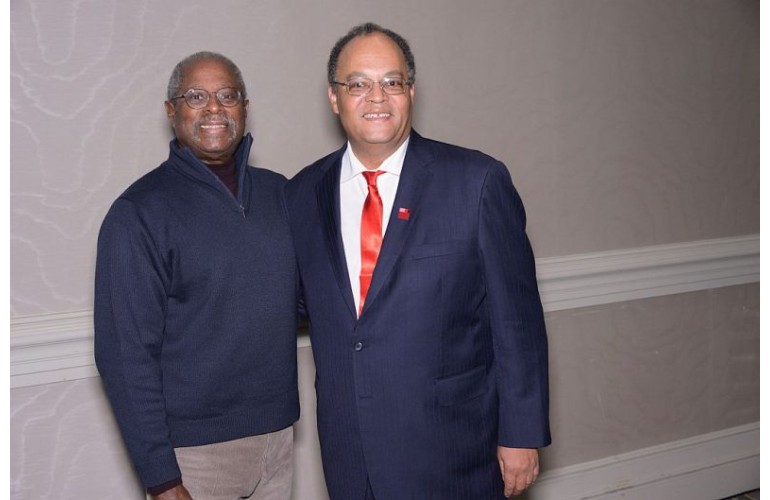 The Walt W. Braithwaite Legacy Award is named for the 1995 Black Engineer of the Year, seen here with BEYA Chairman Tyrone Taborn (right) at the 2020 BEYA STEM Conference in February. Braithwaite helped revolutionize Boeing’s use of computer technology in the aircraft design process. His work in computer-integrated technology was crucial to the development of the CAD/CAM systems that make it possible to design airplanes by computer.

“Dr. Braithwaite retired from Boeing in 2003,” read the Pathfinder citation. “His proactive nature, astute foresight, and transformative role in the aviation industry qualifies him as a Pathfinder.”

Braithwaite joined Boeing in 1966 as a tool engineer, holding several prestigious positions throughout his 36-year career. One of Braithwaite’s most notable aerospace contributions was his role in bringing computer-aided design to Boeing. Known as the father of CAD/CAM Integrated Information Network (CIIN), Braithwaite, then a supervisor in central engineering, introduced networked design /manufacturing systems to the company, changing the way airplanes are designed and produced, and allowing seamless collaboration between different manufacturers. Projects such as the 777, 787 Dreamliner and 737 Max significantly benefited from the technical innovation.

He was a firm believer in getting the job done quietly and was regarded throughout Boeing for his integrity, wisdom, and amiable, unassuming demeanor. As an eager young inventor in Kingston, Jamaica, Braithwaite took apart his toys at Christmas and transformed them into circuits using recycled household materials. When he reached adolescence, Braithwaite had already served as an apprentice at a local machine shop and embarked on a correspondence course in engineering.

This February, during the 2020 BEYA STEM Conference, the Walt Braithwaite Award was presented to Myron Fletcher, who began his aerospace journey at the age of 16 as an aerodynamics engineer at NASA.

In just six years with the Boeing Company, Fletcher was the first engineer to deliver qualified space hardware to the NASA Michoud Assembly Facility in New Orleans where he was a Rocket Propulsion Engineer working on the core stage for NASA Space Launch System, the world’s most powerful rocket.

“Myron makes it his goal to give back and uplift others in promoting STEM and the importance of mentorship by advocating for diversity and inclusion across Boeing’s enterprise,” said Braithwaite during the award ceremony.