FCA engineer urges young people to be what God desired 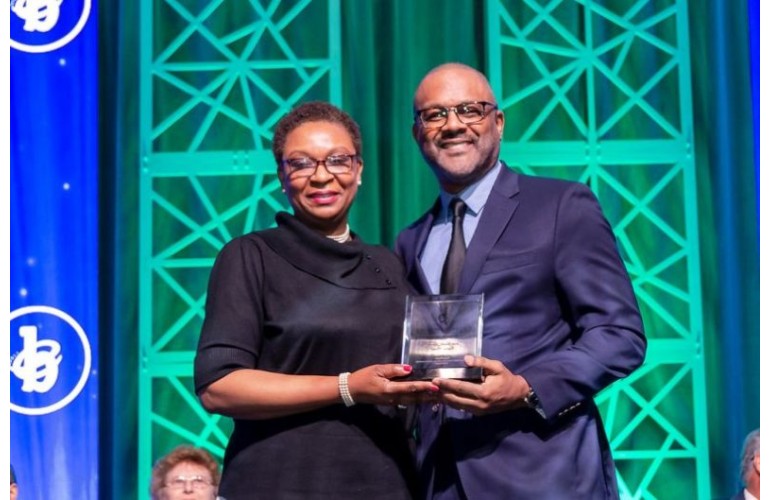 The 2019 Black Engineer of the Year Award (BEYA) in the Gerald Johnson Legacy category went to Tanya Foutch, a quality engineering supervisor at FCA US LLC.

The award was presented at BEYA’s annual Historically Black College and University (HBCU) Engineering Deans Breakfast by Gerald Johnson himself, who received a BEYA for Career Achievement in 2014.  Johnson is vice president, North America Manufacturing and Labor Relations with General Motors.

The Gerald Johnson Legacy Award honors BEYA winners in the automobile industry with a track record for operational excellence, as well as leadership in training and mentoring.

“It’s my pleasure to introduce to you Tanya Foutch, who joined Chrysler over 22 years ago as a tool engineer helping to launch the 5-speed automatic transmission,” said Johnson, who has spent decades ensuring GM’s manufacturing advantage.

Tanya has worked on launch activities of new transmission and engineering changes, identifying causes for plant failures and supporting daily manufacturing operations for the Indiana Transmission Plant 1 or ITP1

“In 2016, Tanya was promoted to engineering supervisor, which brought her responsibilities to include the six-speed, nine

speed, and the launch of the new SiEVT transmission,” Johnson said. The single-input electrically variable transmission (SiEVT) is used for front-wheel drive applications.

Tanya was named resident engineering supervisor at FCA US transmission plants in Kokomo and Tipton, Indiana. In this role, she leads a team focused on identifying quality issues for the company’s current and future portfolio of products.

Deeply committed to the advancement of engineering opportunities for women and minorities in the Kokomo community, Tanya has, since 2017, “been the energy and passion behind the successful STEM camp for girls in the Kokomo area.”

An enthusiastic advocate of science, technology, engineering, and math ( STEM) education in her community, she actively engages with and mentors young women interested in pursuing careers in STEM, according to an FCA blog spotlighting award-winning employees during Black History Month.

“I want to thank God for parents who supported, encouraged, and pushed me to do my best,” Tanya said in her acceptance speech at the HBCU Engineering Deans Breakfast. “They believed I could be whatever I wanted when I grew up. That’s why when a high school counselor told me I could not be an engineer; she met with my biggest advocate: My Mom.”

As the audience applauded in response, Tanya urged young people in the audience to keep being the best they could be.

“Do not let others put limitations on the desires that God has put inside of you,” she said. You can be a mathematician, a scientist, a doctor, an engineer, or an information technology expert. No one sets the limitations on you, but you.”

Tanya graduated from the Illinois Institute of Technology in 1995 with a bachelor’s degree in mechanical engineering. She earned a master’s degree in business administration in 2000 from Anderson University in Indiana.

Recent award winners from FCA include

Kristal Fears, a mechanical engineering graduate from Tennessee State University, who is now manager of the Central Stamping Assembly for FCA US LLC.

I am a contributing writer for SWE Magazine, the quarterly publication of the Society of Women Engineers. I write a column about women engineers who have received awards and honors. I am including Tanya Foutch in the Spring issue and would like a photo of her. It must be 200kb minimum as we are a print and online magazine. Please let me know if you have a photo as the one of her in the online article was not high res enough. We will be glad to credit the photographer.
Thank you,
Charlotte Thomas
831-747-1557 (Pacific)