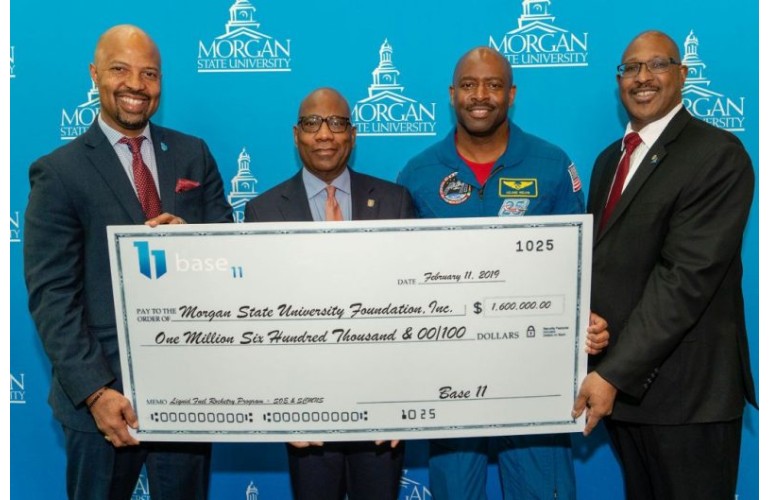 Morgan State University received a $1.6 million check yesterday for Aerospace Workforce and Leadership Development. The nonprofit Base 11 announced that the three-year grant will fund a rocketry lab and launch a student rocketry team at Maryland’s leading public urban research university.

Morgan State was among eight historically black colleges and universities (HBCUs) that put in proposals when the grant was first announced in June 2018.

At the check presentation ceremony held at Morgan State’s campus on Monday, February 11, former NASA astronaut Leland Melvin, who was joined by experts from Dassault Systèmes, Blue Origin, SpaceX, Sigma Pi Phi fraternity, and Base 11 in reviewing the applications, was on hand to formally present the check.

“The proposals for the HBCU Aerospace Workforce and Leadership Development Grant were quite impressive,” said Base 11 Chairman and CEO Landon Taylor. “Morgan State is especially well positioned to leverage their existing resources, faculty expertise, and industry partners to launch a successful and sustainable rocketry program that brings hands-on, experiential learning to students.”

David Wilson, president of Morgan State University said the university was honored. “At Morgan, we encourage our students to be bold and to aim for the stars, and with the launch of this program, we can provide them with the resources to take on that challenge literally.”

The nonprofit Base 11, which focuses on increasing diversity in STEM fields, first entered the world of student rocketry in 2018, with the announcement of the Base 11 Space Challenge.

This $1 million+ competition offers prizes for the first university team to design, build and launch a liquid-fuel rocket to the edge of space (100 km.) by the end of 2021. The challenge attracted entries from 32 teams from across the U.S. and Canada. Morgan State hopes to join forces with one of the teams competing in the Base 11 Space Challenge and help build a winning rocket.