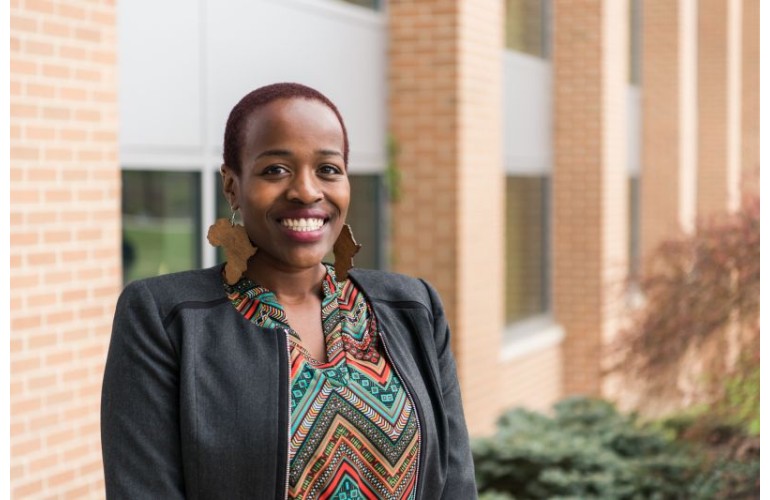 As the first student from UMBC to receive the Rhodes Scholarship, what does the honor mean? How will your research help organ transplant ? What does a nuclear energy engineer do at a semiconductor company?  And what was your first impression of the Large Hadron Collider?

These are the sort of questions I put to Naomi Mburu, 22, the young, urban, chemical engineering graduate from University of Maryland, Baltimore County (UMBC) who will head for the United Kingdom this fall.

Winning the Rhodes Scholarship, a postgraduate award for students to study at the University of Oxford and one of the world’s most prestigious scholarships, “has been an incredible and somewhat unbelievable honor for me,” she says.

“I never could imagine myself lumped in the same group as people like Bill Clinton or Senator Cory Booker.”

Beyond the accolades has been the overwhelming response from her community. “Young people have told me that they are inspired by my story. I really value that others can relate to my story, because oftentimes I see people who win similar honors and cannot even begin to relate to them,” she admits.

It’s a big deal that Naomi’s not only the first to receive a Rhodes Scholarship from UMBC, an honors university in Maryland, she is also “black, female, and an engineer, while most recipients of this scholarship have historically been white, male, and involved in the humanities or social sciences,” she notes.

It shows how UMBC students are being trained to break down barriers and develop new standards of success for society, she adds.

Last summer, Naomi did an internship at the technology giant headquartered in Santa Clara, California, in the Silicon Valley. So what does a nuclear energy engineer do at a semiconductor company?

“I enjoy learning how different sectors of science, technology, and the world as a whole work. So during my time at Intel, I worked on a project that combined engineering with finance, which was a great introduction to the financial side of engineering.

“Working on interdisciplinary projects allows me to learn skills that are less conventional for someone with my major, which helps me to better understand the scientific discipline as a whole so I can better communicate with those who do not have my background. Plus, it is just enjoyable to learn something new, like semiconductors or how to determine the return on investment. You never know when certain skill sets will come in handy,” she says.

One of the few people to put down the Large Hadron Collider as a skill set, we asked Naomi what the experience meant.

“I remember the first time I took the elevator down to the underground control rooms, I was simply amazed by the scale of all of the systems needed just to control the accelerator! The accelerator spans two countries, Switzerland and France, and there are several experiments happening all at once, but somehow everything is orchestrated to work together harmoniously,” she says.

In September, Naomi jets off to England to start a PhD in engineering science and work on heat transfer applications for nuclear fusion reactor.

How will her research with distinguished faculty help organ transplant patients?

“Currently when an organ has been removed from the body, it can last a few hours outside of the body before the organ fails. We are working to develop an organ transplantation system that can monitor and treat the health of the organ as it is being transported, which allow us to double or triple the amount of time that an organ can exist outside of the body,” Naomi explains.

“To do this, we employ sensors that monitor the concentrations of important chemicals within the organ, a pump that adjusts the chemical levels within the organ, and also a system that can mimic the tensile stress the organ would experience if it were still in the body. Ultimately, this can help to improve the success of organ transplants and ultimately the lives of those suffering from organ loss,” Naomi says.

Recently, Mareena Robinson Snowden, the first American-born woman of color to earn a PhD in nuclear engineering from M.I.T., started a new phase in her stellar career as a National Nuclear Security Administration Graduate Fellow. She also serves as technology liaison at the Y-12 Complex, and conducted research at Lawrence Livermore National Laboratory.

Are these locations likely to feature in Naomi’s future work life?

“It’s funny you mention Mareena, I actually met her a two years ago during a conference I was attending at M.I.T. She is a phenomenal and incredibly inspiring young black woman, and we were able to have fruitful conversations about the intersection of nuclear engineering and policy,” Naomi says.

“It is possible that I may end up working at some of these institutions later in my career. Much of the engineering-based nuclear fusion work actually occurs in Europe and Asia currently, so I would be greatly interested in working to better include American researchers in the quest to develop a commercial-size nuclear fusion reactor, and places like Lawrence Livermore National Laboratory could be a great place to find scientists to help foster this connection.”

Once or twice a year, Naomi returns to Mount Hebron High to talk to students about her experience at UMBC and to answer questions about the college experience.

“However, during my time at UMBC I have spent much of my time engaging in the surrounding community and working as a math coach at a school near UMBC,” she says.

According to UMBC, student led organizations including Students for Environmental Awareness, the Environmental Task Force, and the Geography and Environmental Systems Council of Majors all volunteer with partners off campus.

Additionally, graduate students have worked to establish community gardens in local schools and communities through the Shriver Center’s Peaceworker program and the Graduate ‘Food for Thought’ initiative, the college says.

“Also, I am very lucky that four students from Mount Hebron are headed to UMBC as Meyerhoff Scholars in the fall, and I am currently serving as one of their Meyerhoff Summer Bridge Counselors for six weeks this summer,” Naomi adds.

A onetime Meyerhoff and MARC U*STAR Scholar herself, what advice does she have?

“One of the most challenging aspects of becoming a Meyerhoff Scholar is the summer bridge program that we all enter the summer before freshman year. During this time, we were trained to operate as a cohesive unit, which was very different from the individualistic mindset that many of my peers and I had throughout high school,” she said.

“At first, it was uncomfortable and weird to work in groups all the time and to have to frequently worry about the success of my cohort members, but with time I learned the value of this practice,” she says.

The value of teamwork became even more valuable while pursuing her bachelor’s degree.

“There were many times when I struggled through classes, failed exams, and felt overwhelmed with assignments, but my Meyerhoff and MARC U*STAR brothers and sisters were always looking out for me and would stay up extra hours with me just to make sure I would do well in my courses, and I would do the same for them.,” she said.

The UMBC experience helps students transform how they approach school work and challenges, ensuring that at the end of four or five years they have gained personal and professional benefits, strengthened their critical thinking and skills  as well as the all-too-important connections with research faculty in science, technology, engineering, and math (STEM).

“STEM outreach has been the highlight of my time at UMBC, and the more advanced I become in my discipline the fewer women or minorities I see,” Naomi says.

“Young women and minorities are often told they “can’t do math” or “aren’t good at science” which immediately discourages them from pursuing STEM,” she added. “I want to show all young people that STEM is not something you have to be naturally good at to succeed in. For example, I was not naturally a math or science whiz, and I actually had to take three years of summer school during high school to catch up in math and science.

“What set me apart from many of my peers was that I had to learn to work hard from the start to do well in STEM, so when I arrived at college, I already had developed a strong work ethic. Everyone should know that it is okay to struggle with a subject more than other people do. What matters most is what you are passionate about, and your passion will ultimately help drive you to succeed in whatever that subject is,” she says.

Whatever is in Naomi’s STEM future, she has an “incredibly supportive community” in Ellicott City, which suffered
historic flooding in its downtown area.

“It feels as if the whole community won the award, not just me, which shows the sense of community that those in my neighborhood feel throughout both good and hard times,” Naomi says.