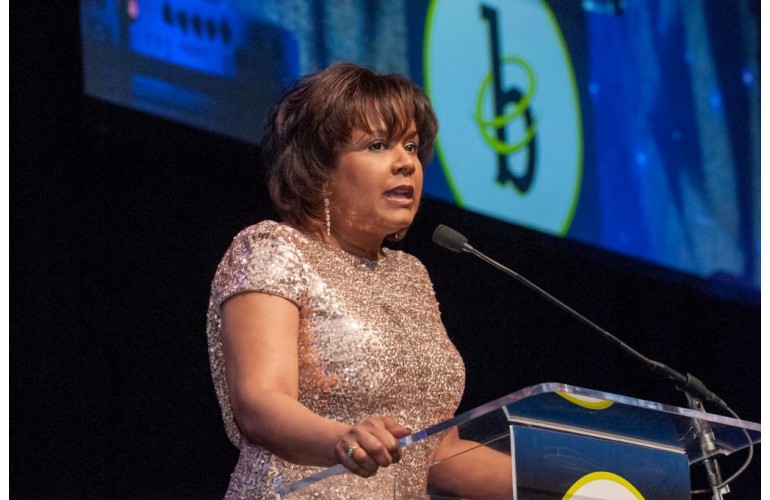 Stephanie C. Hill, the 2014 Black Engineer of the Year, is the second woman to receive the top award at Lockheed Martin Corporation, co-host of the BEYA STEM Conference.

Over her 30-year career Hill has worked on big technology challenges. In 2008, she wrote code for a launcher that shot down a rogue satellite hurtling down to Earth out of the sky.

Currently, Hill is senior vice president for corporate strategy and business development and a corporate officer at Lockheed. She has held a number of key positions in Information Systems, and Electronic Systems,  Mission Systems & Sensors, and Rotary and Mission Systems.  Hill earned a Bachelor of Science degree in Computer Science and Economics from the University of Maryland in 1987 before joining the defense contractor.

“My story isn’t unique, but I sure hope it can be inspiring enough for us to believe that if we expose our young people to the marvel of STEM as early as we can, far earlier than I was, we will have more of our young people pursuing careers in STEM,” she said.“We can’t afford any more accidental engineers.”

Alicia Boler Davis is the sixth woman in history to receive the top Black Engineer of the Year Award (BEYA), for her impact in growing the STEM pipeline.

“I’m well aware that over three decades, I’m the sixth woman to receive this award,” Boler Davis said in her speech. “But I sincerely hope it doesn’t take another 32 years for six more women to get up on this stage. And I believe it won’t, because of our commitment to open doors for our younger sisters.”

“My family encouraged me and I had more encouragement along the way,” she said. “People like my middle school teacher who quickly identified my love of, and aptitude for, math and science, and who truly encouraged me to be an engineer.

“That’s something black girls weren’t hearing a lot in those days and they still don’t hear it enough today. But organizations like this help change that with the STEM Conference,” she said at the 2018 BEYA Gala.

After the “Passing of the Torch” ceremony at the 2019 BEYA STEM Conference, Boler Davis talked about a number of organizations she worked with during her banner year as the 2018 Black Engineer of the Year.

“They are committed to increasing the number of women in STEM and provide hands-on opportunities for minority students to gain exposure to careers in STEM,” she said.