Vernecia Johnson: What sparked her interest in Human Resource Management 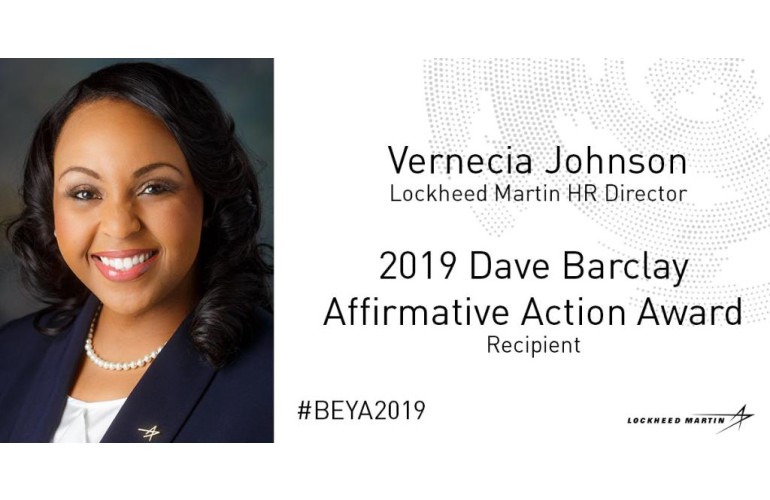 Johnson (seen left in blue in the Lockheed Martin group photo taken at the 2019 BEYA Gala) is director of human resources for Lockheed’s Air Mobility and Maritime Missions and human resources lead for the Marietta, Georgia site.

“My dad worked in manufacturing, in a plant, a union environment,” Johnson said in her acceptance speech. “He also had two (small) businesses. My mom was a secretary, who completed college later in life, after having three daughters and ultimately became superintendent in the prison system. Listening to and observing my parents’ career experiences sparked an interest in human resources.”

As a teenager, Johnson said she didn’t know what human resources was but she followed her interest in influencing the relationship between people and employers, fueling individual and company success.

“I’m honored to be doing exactly that today at Lockheed Martin,” she said.

A graduate of Elizabeth City State University with a bachelor’s in psychology, she also earned a master’s degree in human resources-business and industry from North Carolina A&T State University.  She is a member of the board of directors of Girls Inc. Atlanta and the Society for Human Resource Management (SHRM).

Lockheed Martin has been a sponsor of the BEYA Conference for more than 30 years.

Other responsibilities he assumed included equal opportunity, ethics, employment, and college relations. Barclay was also actively involved in community and industry organizations, including the Los Angeles Brotherhood Crusade, the National Black United Fund, and the Aerospace Industry Equal Opportunity Committee among others.