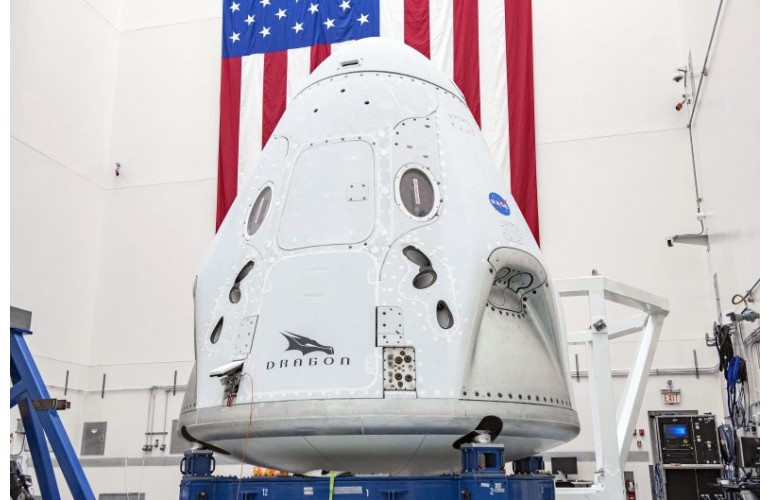 NASA astronauts launched Saturday, May 30, in an American crew spacecraft on its way to the International Space Station. The SpaceX Crew Dragon spacecraft carrying NASA astronauts Robert Behnken and Douglas Hurley lifted off at 3:22 p.m. EDT on the Falcon 9 rocket at NASA’s Kennedy Space Center in Florida.

“Today a new era in human spaceflight begins as we once again launched American astronauts on American rockets from American soil on their way to the International Space Station, our national lab orbiting Earth,” said NASA Administrator Jim Bridenstine. “I thank and congratulate Bob Behnken, Doug Hurley, and the SpaceX and NASA teams for this significant achievement for the United States. The launch of this commercial space system designed for humans is a phenomenal demonstration of American excellence and is an important step on our path to expand human exploration to the Moon and Mars.”

On March 3, 2019, Dragon, the first private spacecraft to the space station, successfully docked, becoming the first American spacecraft in history to autonomously dock with the International Space Station.

Check out the list of BEYA winners at NASA below:

“When I was a kid, space did not exist…astronauts were Flash Gordon and Ming. My goal in life was to be an aerospace engineer. Along the way, I joined the Air Force and became a pilot and eventually an astronaut.” –Read the full interview Tyrone  Taborn had with Guy Bluford, the first African American in space, on pages 51 and 52 of US Black Engineer magazine’s 1991 Conference Issue.

BEYA winner Robert Lee Curbeam is a spaceman who helped build the International Space Station. He holds the record for the most spacewalks during a single spaceflight.

In June 1987, Mae Jemison (Achieving Liftoff: Black Women in Star Ships) broke through the glass ceiling when NASA selected her for astronaut training. She was the first black woman in the program. Five years later, Jemison made history again as the first African American woman in space. A lifelong explorer, she’d go to space again if there were a mission to Mars.

The Dr. Walt W. Braithwaite Legacy Award, named after the 1995 Black Engineer of the Year, was presented to Myron Fletcher at the 2020 BEYA STEM Conference.  (Aerospace engineering is a dream come true for BEYA winner) Fletcher began his aerospace journey at the age of 16 as an Aerodynamics Engineer at NASA. He was the first engineer to deliver qualified space hardware to the NASA Michoud Assembly Facility, he was a Rocket Propulsion Engineer working on the core stage for the NASA Space Launch System, the world’s most powerful rocket.

Dr. Jon Goldsby was honored as Senior Technology Fellow of the year during the 2018 BEYA STEM Conference, becoming one of the few NASA employees to be a two-time Black Engineer of the Year Award (BEYA) winner. (How Jon Goldsby pays it forward at NASA) Along with Science Spectrum award winners such as Woodrow Whitlow, Richard Christiansen, Isaac Blankson, and Kelvin M. Manning, he joins a long line of people in science, technology, engineering, and math (STEM) who have been recognized at the conference.

But Goldsby’s two awards are probably best in class. In 2012, he received the Outstanding Technical Contribution Award at BEYA for research on the jet and turbine engine ceramic and metals, which need to stay intact at temperatures hotter than 1,832 degrees.

Dr. Wendy Okolo, seen on the cover of CCG’s Becoming An Engineer career guide, won the Most Promising Engineer in Government Award at a recent BEYA STEM Conference.

Now at NASA Ames, Okolo mentors interns,  manages internship opportunities for her team, and serves as the official intern manager for Diagnostics and Prognostics.

The Ames Research Center, which is NASA’s center in Silicon Valley, California, contributes to virtually every major NASA mission. Ames is involved in the International Space Station, Journey to Mars, Earth Right Now, and the Solar System and Beyond missions.