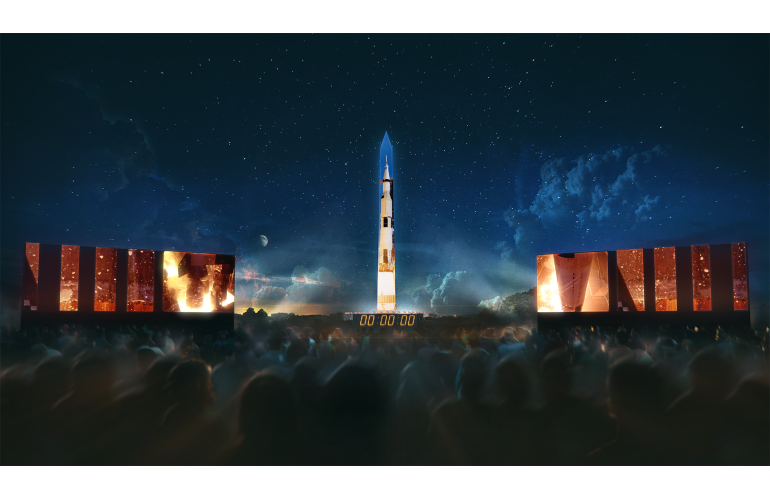 For three nights this week, the Smithsonian’s National Air and Space Museum will celebrate the Apollo 11 mission with a life-sized projection of the Saturn V rocket on the 355-foot Washington monument in the nation’s capital.

The 363-foot Saturn V rocket will be projected onto the east face of the Washington Monument. The viewing area will be outfitted with full sound and a 40-foot-wide recreation of the famous Kennedy Space Center countdown clock.

“The Washington Monument is a symbol of our collective national achievements and what we can and will achieve in the future. It took 400,000 people from across the 50 states to make Apollo a reality. This program celebrates them, and we hope it inspires generations too young to have experienced Apollo firsthand to define their own moonshot,” said Ellen Stofan, the John and Adrienne Mars Director of the museum.

The public will be able to experience “Apollo 50: Go for the Moon” July 19 and 20 from viewing areas on the National Mall in front of the Smithsonian Castle between ninth and 12th streets. On Friday, July 19, and Saturday, July 20, a special 17-minute show, “Apollo 50: Go for the Moon” will combine archival footage to recreate the launch of Apollo 11 and tell the story of the first moon landing.

Support for “Apollo 50: Go for the Moon” is provided by Boeing with additional support from Raytheon.

“The Saturn V is an indelible symbol of the Apollo program, built by Boeing and its heritage companies,” said Tim Keating, Boeing executive vice president of government operations. “We’re excited to support the national celebration of that historic undertaking, as Boeing continues to play a leading role in the next generation of space exploration.”

More information about the viewing area and showtimes can be found here or text Apollo50GO to 888777 for live updates the day of the show.

To mark the Apollo 50th anniversary, we have been taking a look back at the life and careers of trailblazing African Americans who have traveled into space.

Stephanie Wilson was the second African American woman to go into space. She is a veteran of three spaceflights and logged more than 42 days in space. She was selected as an astronaut in April 1996.

Joan Higginbotham is the third African American woman to go into space. She logged over 308 hours in space during her mission with the crew of STS-116.

Yvonne Cagle completed two years of training and evaluation in 1996 and is qualified for flight assignment as a mission specialist.  Cagle’s groundbreaking work is preserving NASA space legacy data.

On January 5, 2016, NASA announced that Jeanette Epps will become the first African-American space station crew member, as a flight engineer on Expedition 56.