Boeing at the Technology Recognition event 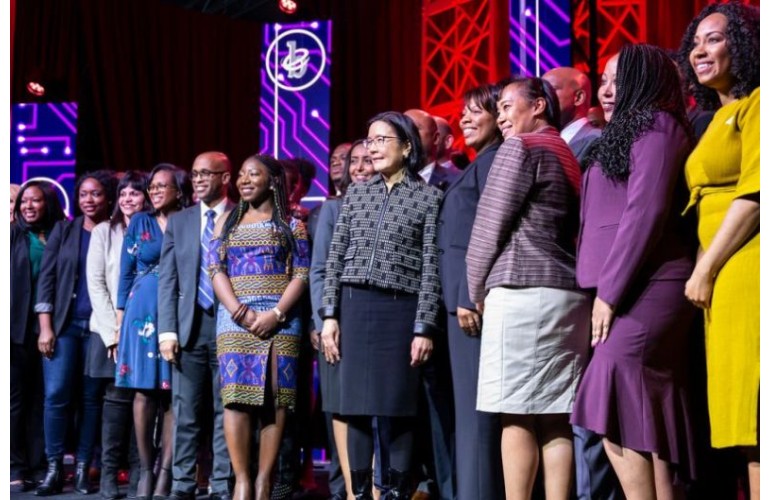 Emceeing the event for the first time was Dr. Robin Coger, one of the few female engineering deans in the United States.  She serves as chair of the Council of Engineering Deans at Historically Black Colleges and Universities (co-host of the BEYA STEM Conference). Dr. Coger’s co-emcee was veteran BEYA host Dr. Kendall Harris, provost and vice president for academic affairs at Texas Southern University.

Over 33 years, the BEYA Conference has:

“We have been doing this quite a while,” said Dr. Harris. “Through their involvement and role modeling, BEYA winners are increasing diversity, equity and inclusion in STEM and preparing the workforce for the future. Employer commitment to diversity has become a major factor in the selection of organizations that individuals choose to work for.”

Research shows that 78 percent of Americans want companies to address social issues. Currently, more than 550 CEOs of leading companies and organizations are leveraging their individual and collective voices to advance diversity and inclusion in the workplace.

“This luncheon celebrates the fact that the most important aspect of any company is its people,” said Dr. Coger. “A nominated employee is already a winner. And if the nomination results in an award it’s yet another win. MITRE recognized this in their article, published a while back. “A Case Study in Retention: Incorporating BEYA The MITRE Way” acknowledged that MITRE experiences an 80 percent increase in the retention rate in employees who receive recognition.

Coger said competing for national recognition benefits companies by demonstrating the outstanding skills and experience of staff and it inspires other employees that appreciate their colleagues’ accomplishments, and experience good feelings about that company.

“The kind of acknowledgment that takes place at today’s Technology Recognition luncheon makes a positive impact on the culture of the participating organizations that have selected these outstanding men and women who will receive awards,” she said.

Among the award winners were scientists and engineers from Boeing, the world’s largest aerospace company and leading manufacturer of commercial jetliners and defense, space and security systems.

“For more than 100 years, Boeing has shaped the course of human history through aerospace innovation,” Scott said in his keynote. “In the early part of our last century, our founder Bill Boeing spoke words that still ring true today:

‘We are embarked as pioneers upon a new science and industry in which our problems are so new and unusual that it behooves no one to dismiss any novel idea with the statement that ‘it can’t be done!’’

“Those words come alive at Boeing every day through our amazing people. Some of whom you will meet in this program,” Scott continued. “Our products and technologies connect the globe, protect freedom, and advance scientific discovery around the world. From the depths of oceans to Mars and beyond. We also have a responsibility here on Earth. That’s why our environmental strategy focuses on building commercial and military airplanes that reduce carbon emissions; are more fuel efficient and contribute less community noise. We are committed to cleaner water, air, and land. At Boeing, we do more than think about the future. We engineer it, we solve its problems, and we build it every day. Diversity/inclusion is one of our enduring values. We embedded it in our business to ensure that we remain innovative and competitive for the second century of success. Diverse workforces are better at innovating and solving problems. They have higher sales revenues, more customers, larger market share and greater relative profits than less diverse companies,” Scott said.

Diana Sands (seen center in the group photo above) is senior vice president of the Office of Internal Governance and Administration for The Boeing Company and a member of the company’s executive council.

Click here to view highlights from the 2019 Technology Recognition event at the BEYA Conference.